The brutal storm pummeling the Houston area is putting the brakes, at least for a time, on the area’s recent economic upswing. And the impact is quite likely to be especially deep given the crucial role the region plays in the nation’s energy, chemical and shipping industries.

Despite wobbly oil prices, local job growth has accelerated, along with continued improvement in home sales and construction. The number of Texas oil rigs has been rising over the past year, giving a big lift to exploration and chemical manufacturing jobs. Now, however, the Houston area could sustain billions to tens of billions in lost economic activity.

Those losses will be seen in homes not purchased, sales not closed, gas not bought or shipped. Hundreds of thousands are without power, and there will be lost wages from people whose employers are shut down or who can’t get to work.

The Gulf Coast of Texas — including Houston and the surrounding areas — is one of the nation’s economic powerhouses, accounting for roughly $600 billion in economic activity, according to the Perryman Group, an economic analysis firm in Waco, Tex.

“The Gulf Coast ports are critical to the U.S. supply chain, and the refined petroleum and petrochemical production is critical to the U.S. economy,” said Ray Perryman, the company’s chief executive. “It does not appear that any major capacity was seriously damaged, but even a shutdown of a few weeks can affect U.S. economic performance.”

The Houston metropolitan area, the nation’s fifth largest, accounted for 2.9 percent of the nation’s gross domestic product as of 2015, and that figure is almost certainly higher today. A good amount of that comes from trade: Texas accounts for about half of petroleum and gas exports, along with about a fifth of chemical exports.

“Since the Port Arthur refining complex is the largest in the U.S. and the second largest in the world, this will no doubt impact gasoline and chemicals prices,” said Brett Ryan, senior United States economist at Deutsche Bank. 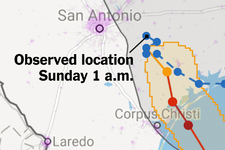 Graphic | Maps: Harvey’s Destructive Path Through Texas Maps and animated satellite imagery show the scale and reach of the storm.

A second major economic impact will be property damage, which is more lasting and significant than lost activity. Economists can only guess, but based on the tallies of past hurricanes, Mark Zandi, chief economist of Moody’s Analytics, gave a ballpark estimate of at least several billion and possibly tens of billions.

But if other disasters are a guide, much of that lost potential will be diverted for now and made up later, through money spent on cleanup and rebuilding.

Moreover, factories and refineries are rarely running at full capacity, and as they come back online they can ramp up production to meet the backlogs that accrue. “Businesses have stockpiles and the ability to catch up,” said Christopher Thornberg, founding partner of Beacon Economics, a consulting firm.

As the floodwaters drain away and Texas shifts to clean-up mode, followed by a mammoth effort to replace what was lost, the daily modes of commerce will shift but not stop. Disruptions, displacement and property damage are quickly followed by federal aid and insurance checks.

“This is going to be disruptive but the Houston economy will overcome it very quickly, just like other regions,” Mr. Zandi said.

In fact, when natural disasters do show up in economic data it is usually as a small growth bump a few months after the storm, when rebuilding accelerates and insurance checks are cut.

One might think that the scale of the damage would give future home buyers some pause. In the aftermath of Hurricane Sandy in 2012, for instance, investors and homeowners had big questions about property values in coastal New York and New Jersey.

But according to an analysis of home values by Zillow, the real estate database company, home buyers have short memories when it comes to storms. It seems that people like living by the ocean so much that they will keep building homes there even when it becomes clear that a storm will periodically destroy them.