The appraiser who went to Brooklyn in the 1930s to assess Bedford-Stuyvesant for the government summarized the neighborhood’s prospects on a single page. Many brownstones in “obsolescence and poor upkeep.” Clerks, laborers and merchants lived there, about 30 percent of them foreign-born, Jews and Irish mostly.

The government-sponsored Home Owners’ Loan Corporation drew a line around Bedford-Stuyvesant on a map, colored the area red and gave it a “D,” the worst grade possible, denoting a hazardous place to underwrite mortgages.

Lines like these, drawn in cities across the country to separate “hazardous” and “declining” from “desirable” and “best,” codified patterns of racial segregation and disparities in access to credit. Now economists at the Federal Reserve Bank of Chicago, analyzing data from recently digitized copies of those maps, show that the consequences lasted for decades.

As recently as 2010, they find, differences in the level of racial segregation, homeownership rates, home values and credit scores were still apparent where these boundaries were drawn.

“Did the creation of these maps actually influence the development of urban neighborhoods over the course of the 20th century to now?” said Bhash Mazumder, one of the Fed researchers, along with Daniel Aaronson and Daniel Hartley. “That was our primary question.”

The economists now believe that appraisers like the one in Bedford-Stuyvesant weren’t merely identifying disparities that already existed in the 1930s, and that were likely to worsen anyway. The lines they helped draw, based in large part on the belief that the presence of blacks and other minorities would undermine property values, altered what would happen in these communities for years to come. Maps alone didn’t create segregated and unequal cities today. But the role they played was pivotal.

The maps became self-fulfilling prophesies, as “hazardous” neighborhoods — “redlined” ones — were starved of investment and deteriorated further in ways that most likely also fed white flight and rising racial segregation. These neighborhood classifications were later used by the Veterans Administration and the Federal Housing Administration to decide who was worthy of home loans at a time when homeownership was rapidly expanding in postwar America.

The new research reaffirms the role of government policy in shaping racial disparities in America in access to housing, credit and wealth accumulation. And as the country grapples with the blurred lines between past racism and present-day outcomes, this new data illustrates how such history lives on.

“We now have evidence that is very systematic and nationwide that has detailed that these borders did matter,” said Leah Boustan, an economic historian at Princeton familiar with the research, which she called “pathbreaking.”

Historians have long pointed to the significance of the Home Owners’ Loan Corporation maps. But a large collection of the 239 cities that were originally appraised was only recently digitized by a project at the University of Richmond, making the underlying geographic data widely available.

The Chicago Fed economists used that data to identify boundaries between neighborhoods with different ratings. As of 1930, there were already clear differences along some of the borders in racial demographics and homeownership rates. Blacks were already more likely to be living in “D” neighborhoods than “C” neighborhoods, for example. But differences in the black share of the population and homeownership rates widened after the 1930s, reaching a peak in the 1970s, when federal laws requiring equal access to housing and credit took effect. 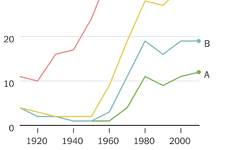 Those patterns alone don’t prove that the maps caused widening gaps in segregation or homeownership. To do that, the researchers drew their own hypothetical boundaries to compare what might have happened had the Home Owners’ Loan Corporation placed the lines in other locations where similar differences existed at the time. The disparities along those simulated borders didn’t widen; they disappeared.

The differences the researchers detected from the maps kept reappearing whether they looked across whole neighborhoods or just at blocks adjacent to these borders. They reappeared even when the researchers looked at a subset of boundaries where the nearby demographics were barely changing before the 1930s. By analyzing the differences in several ways, the researchers say they feel confident they have picked up on effects that were actually caused by the maps.

People living in poorly rated neighborhoods would have had trouble obtaining mortgages for homes there, regardless of their individual creditworthiness. Other consequences most likely piled up from there.

“The availability of credit has really significant impacts on every dimension of neighborhood life, in terms of the quality of real estate, the willingness of investors to come in, the prices of property, the emergence of predatory practices,” said Thomas Sugrue, a historian at New York University. “These are all direct consequences of the lack of affordable loans and affordable mortgages.”

Blacks who did not have access to conventional home loans had to turn to schemes like contract sales that entailed steep interest rates (the practice is returning today in many of these same communities). Because those homes could be frequently repossessed by predatory lenders, these neighborhoods would experience more population instability.

Slumlords, too, would move in, squeezing value from subdivided rental homes that otherwise might have been owned by families. Commercial investors, meanwhile, would have stayed away. Blacks discriminated against in the housing market elsewhere would have had limited options to move away. And any existing homeowners would have struggled to obtain credit for maintenance and repairs, leading to the further deterioration of properties.

This process can be invisible to people who might look at these communities, Mr. Sugrue said, and place blame for their disrepair on residents who don’t value their homes.

There would be long-term and invisible effects, too, on family wealth, as people who weren’t able to buy a home never developed the equity that would allow their children (and grandchildren) to buy homes.

The black-white gap in homeownership in America has in fact changed little over the last century, according to research by Robert Margo and William Collins. That pattern helps explain why, as the income gap between the two groups has persisted, the wealth gap has widened by much more.

That these maps made a difference that’s still visible today is striking.

“It doesn’t surprise me at all,” said Richard Rothstein, a researcher with the Economic Policy Institute who has written a new book, “The Color of Law,” on how official policies like redlining fostered segregation. These maps — and their lingering effects — derive from a time when the American government, he writes, believed that “inharmonious racial groups” should be separated.