Air travel, once viewed as efficient, exclusive — even glamorous — now sometimes seems like a chore. The acidic exchange on Twitter recently between Ann Coulter and Delta Air Lines, which required the conservative columnist to give up her Comfort+ seat for a regular one in coach, was a fresh reminder of the tense and sometimes combative atmosphere at airports across the nation that has put both travelers and airline employees on edge.

Will one be hauled off the plane because of overbooking? Is speaking a foreign language going to set off the passenger at your elbow? Will a scorpion drop from the overhead bin? Will a uniformed officer write up an unauthorized birthday cake or will a flight attendant erupt in a red-faced outburst of air rage? All of those things — and others, some worse — are possible, as The New York Times’s Sarah Lyall learned during a weeklong odyssey.

Times journalists crisscrossing the country in recent weeks have found that the stressed-out state of air travel is clear. Here are their stories. 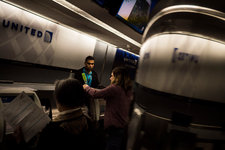 Interactive Feature | Glitch in Your Travel Plans? Share Your Story The New York Times is collecting anecdotes from readers who have witnessed evidence of heightened tension at airports across the United States.

Upon landing in Newark from Chicago, a United Airlines flight attendant welcomed passengers over the intercom, told them which baggage carousel would deliver their luggage and then mentioned one passenger by name, asking him to meet the police officer waiting inside the terminal. Murmurs rippled through the aisles as passengers wondered what was going on. Waiting at the end of the Jetway was a uniformed Customs and Border Protection agent. The singled-out passenger approached him. But instead of an arrest, there was an embrace. Turns out they were brothers. “Were you scared?” the customs agent asked the passenger. “I knew it was you,” the passenger said. “How’s Dad?” — MARC LACEY

After a long flight from São Paulo, Brazil, to Kennedy Airport, I quickly checked “No” on the customs declaration form where it asked if I was bringing fruits or plants into the country. As an experienced traveler, I had filled out this form dozens, maybe hundreds of times. I could recite it from memory. I grabbed my suitcase from the carousel, hoisted my backpack and headed for the door. Out of the corner of my eye, I saw a customs agent with a beagle on a leash coming in my direction. “Open your backpack,” the agent said. I did, and was shocked to find a small apple inside. I had put it there for a snack on the plane, then forgotten to eat it. “No fruit,” he said. “You lied to customs. That’s a $300 fine.” I told him that I had simply forgotten the apple, but he was unconvinced. He scribbled some marks on my customs form and sent me to an X-ray machine. There, another agent found a bonanza in my suitcase: a kilo of Brazilian coffee and a box of Middle Eastern pastry given to me by a friend from Lebanon. “Where are you from?” this agent asked. After another stern warning about fruit, he let me go — minus the apple. — ANEMONA HARTOCOLLIS

The red-eye between Los Angeles and New York is a necessary evil for bicoastal travelers determined to squeeze all the time they can get on either side of the country. For those who can pay for it, there’s luxury. Everyone else angles for the best seat they can get in coach. On an American Airlines flight one recent Sunday night, a passenger in his 20s turned to a woman seated next to him in a middle seat. “Would you like to take my girlfriend’s window seat in the emergency exit row?” he asked politely, barely finishing the question before the woman was up and hurrying to her new, more spacious spot. But before I could be too comforted by the civility of my fellow travelers, I heard someone grumbling loudly after another passenger had asked him if he would move. “It’s so rude; there’s no sanity to any of this,” he said, punctuating his complaints with profanity. A nearby flight attendant quickly got involved. “Sit down quickly. We need to take off. And if you argue, I will not hesitate to have you removed.” — JENNIFER MEDINA

I was boarding a flight back to New York from Nashville on a Delta-branded regional jet, making my way to a seat in the next-to-last row, when one of the flight attendants showed signs of needing a break. She was at her post in the plane’s tail, and a young man a few rows in front of her was struggling to squeeze his carry-on into the last empty cubic foot in the overhead compartment above his row. Seeing an entirely empty compartment above two empty seats across the aisle, he started to switch his bag to that side, when the flight attendant piped up in a peremptory tone of voice, saying he couldn’t do so, since that bin needed to be saved for the passengers in the seats beneath it. This was antithetical to the “grab any open bin on the way to your seat” ethos that has prevailed in all my years of traveling, but I did not get involved. A colleague, seated in the aisle seat across from me, asked the passenger next to me to trade places with her. That prompted the same flight attendant to deliver another scolding. “You have to ask me to switch seats,” she said. “You can’t just do that yourselves. You have to go through me.” — DAVID HALBFINGER