Often referred to as the “Oracle of Omaha” — Nebraska native Warren Buffett is an investing legend, business magnate and philanthropist.

When he was 11, Buffett already bought stock, and by 16 he had amassed more than $53,000 from various business ventures and investments. From a young age, Buffett was bound for success.

Related: Warren Buffett: 5 Things You Can Learn From the Man Who Invested $1 Billion in Apple

Although, like anyone else, he faced setbacks. From being rejected at Harvard Business School to getting told he would fail by his father-in-law, hard work and resilience pushed Buffett towards success. Today, he’s recognized for his achievements and uses his money for the greater good.

From using a Nokia flip phone to pledging 85 percent of his Berkshire Hathaway stocks to various charitable foundations, check out these 20 Warren Buffett facts that might surprise you.

1. He bought his first stock when he was 11-years-old.

While most 11-year-old boys were playing T-ball and reading comic books, Buffett bought stocks. In the spring of 1942, at 11-years-old, Buffett purchased shares of Cities Service Preferred for $38 a piece.

Even since he was young, Buffett’s not only been tactful, but also an extremely hard worker.

When his family moved to Omaha, Neb., Buffett delivered The Washington Post every morning and brought in about $175 a month (that’s more than most teachers made during that time).

He also pursued a few side gigs such as selling used golf balls and collector stamps and buffing cars. By the time he turned 16, he had amassed the equivalent of $53,000.

3. He was rejected from Harvard Business School.

After graduating from the University of Nebraska in three years, Buffett applied to Harvard Business School. But during a brief interview with the school that would determine his acceptance, the staff said to Buffett: “Forget it. You’re not going to Harvard.”

After much disappointment from the rejection, Buffett discovered that his idols Benjamin Graham (“the father of value investing”) and David Dodd were professors at Columbia Business School.

“I wrote them a letter in mid-August,” Buffett shares. “I said, ‘Dear Professor Dodd. I thought you guys were dead, but now that I found out that you’re alive and teaching at Columbia, I would really like to come.’ And he admitted me.” 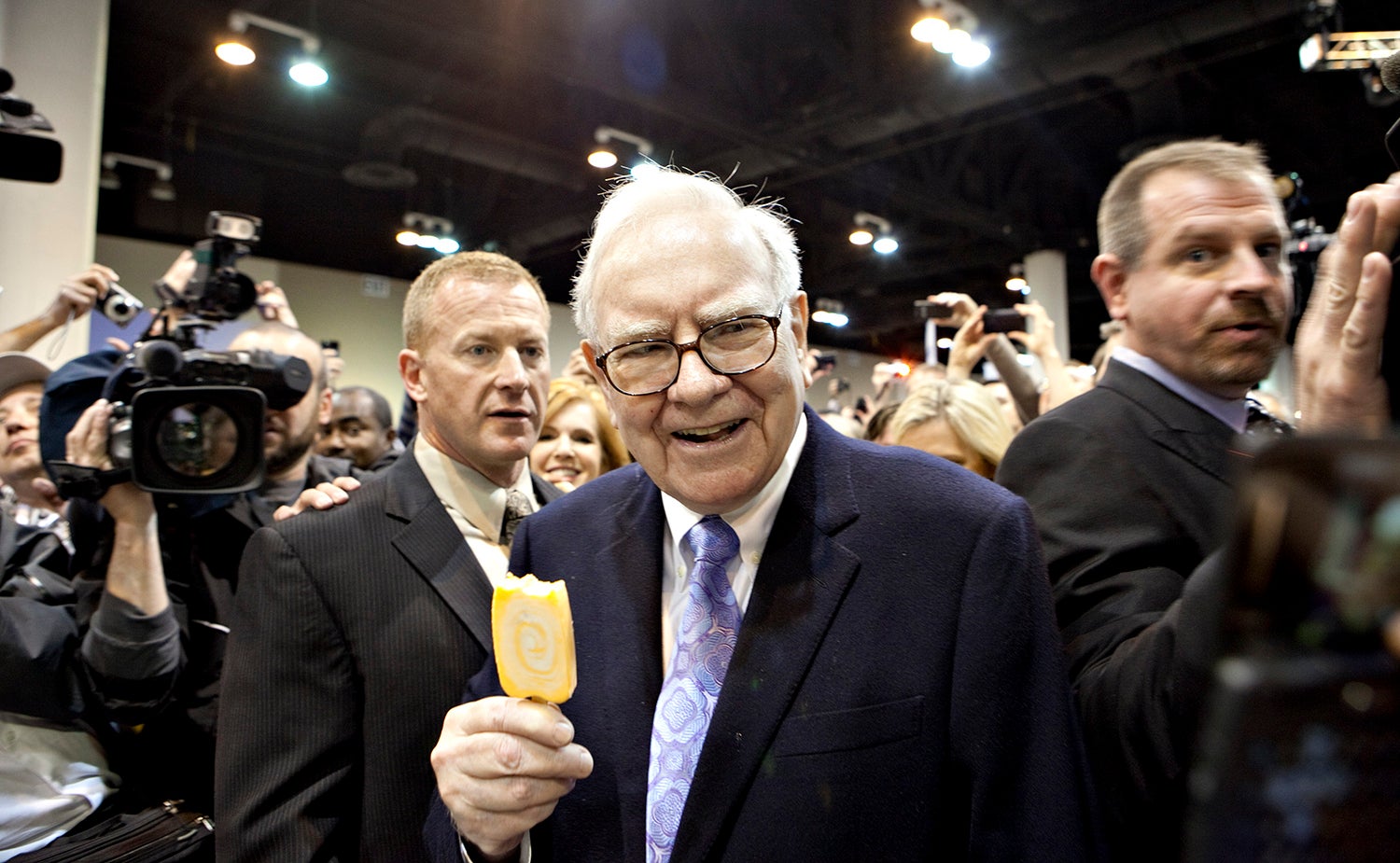 In an interview with Fortune, Buffett claimed he is “one quarter Coca-Cola” — “If I eat 2,700 calories a day, a quarter of that is Coca-Cola. I drink at least five 12-ounce servings. I do it every day.”

Sometimes for breakfast, he eats a can of Utz potato sticks (yes — a can, not a bag) to accompany his soda. Other times he takes a sweeter approach and indulges in a bowl of ice cream to jump start his day.

When asked how he’s managed to stay healthy with such a salty and sugary diet, he said, “I checked the actuarial tables, and the lowest death rate is among 6-year-olds. So I decided to eat like a 6-year-old.”

When you think of a billionaire, you typically think of mansions, vacation homes and expensive cars. That’s never been the case for Buffett. (Perhaps that’s why we’re all so fascinated by him.)

Buffett has lived in the same Omaha house since 1958 that he originally bought for $31,500. The house is a simple five-bedroom, 2.5-bathroom house.

6. His father-in-law told him he would fail.

After proposing to his wife in 1951, Buffett’s father-in-law asked him to come over for a “talk.” Turns out, his father-in-law didn’t have much faith in Buffett and his plans for the future. In fact, he was adamant that Buffett would fail. 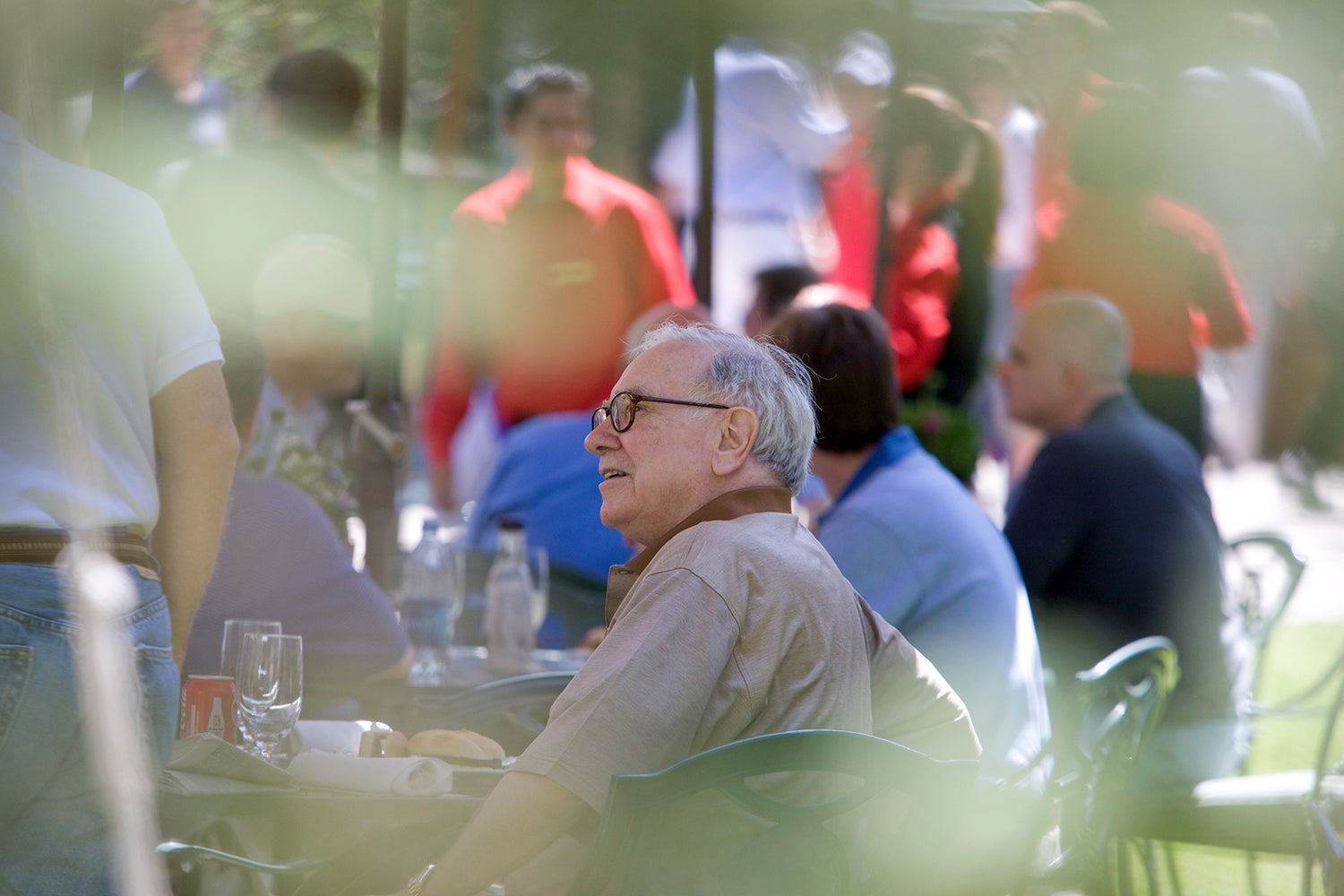 7. People will pay millions to have lunch with him.

Since 2000, Buffett has held an annual fundraiser, auctioning off a charity lunch with him on eBay. In 2012 and 2016, people were so eager to sit down with Buffett they placed bids for more than $3.4 million. The money raised went to the San Francisco-based anti-poverty charity GLIDE, and the winner (who typically remains anonymous) gets to invite seven friends to lunch with Buffett at Smith and Wollensky steakhouse in New York City.

The auction has raised more than $20 million in total.

9. Nearly 94 percent of his wealth was earned after he turned 60.

Success comes at any age. Although Buffett was extremely successful before the age of 60 — his net worth was a noted $376 million when he was 52-years-old — nearly 94 percent of his wealth came after he turned 60. At 60, he was worth more than $3.8 billion.

Although Buffett has a Twitter account (@WarrenBuffett) with more than 1.25 million followers — it only has nine published tweets, and it turns out none of them were written by him.

“I have this friend that talked me into getting a Twitter feed. She’s put up a couple things. But, the answer is I’ve never tweeted anything really myself,” he told CNBC. 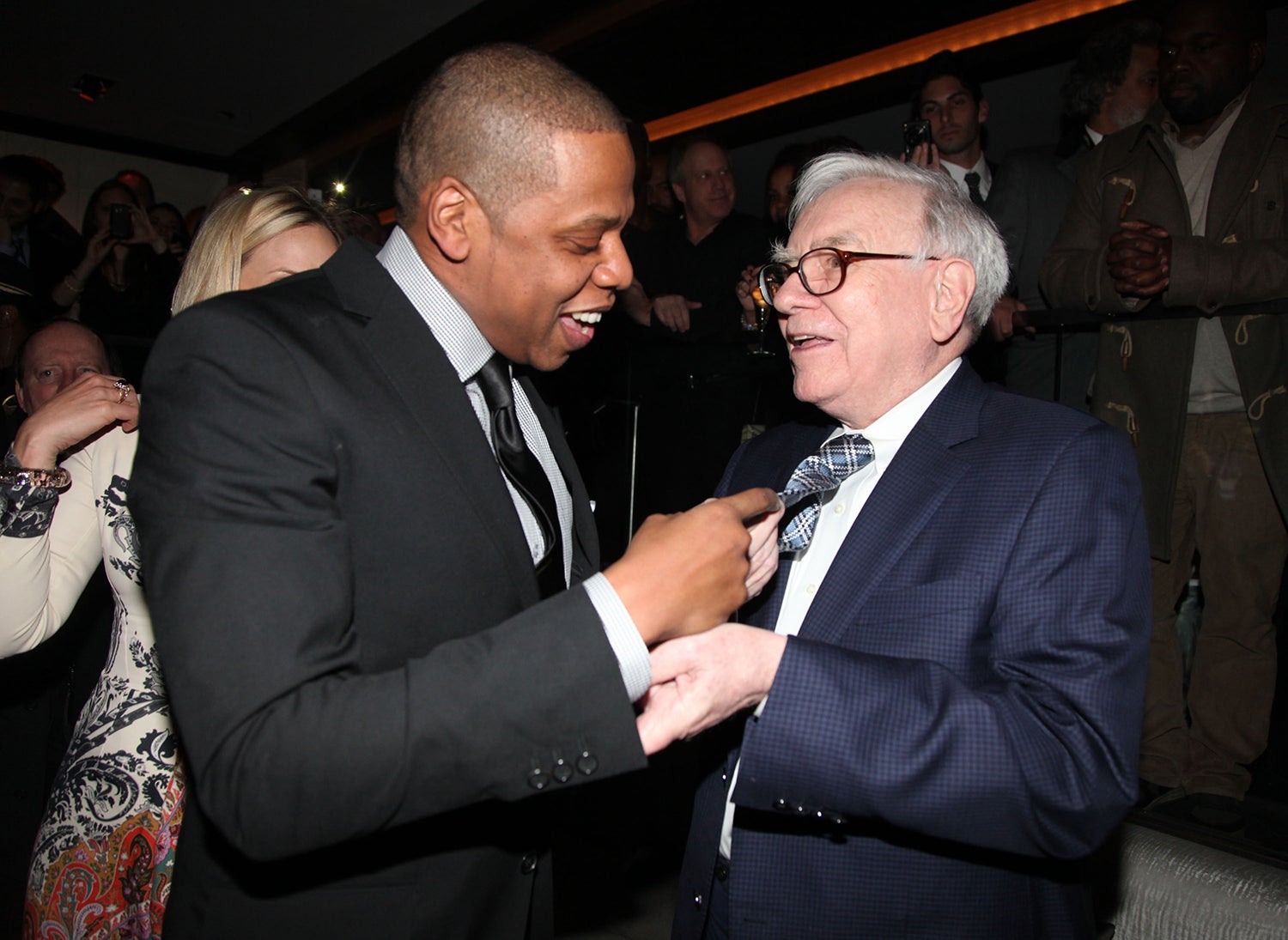 Buffett owns close to 20 suits, all made by the same designer — Madam Lee. There’s an interesting story here.

During a trip to China, upon arriving to his hotel, “Two guys jumped in the room. … They started sticking tape measures around me and everything, then they showed me a book with a whole bunch of samples and said ‘pick out a suit. Madam Lee wants to give you one,’” Buffett shared with CNBC.

Without meeting her, Buffett picked out a suit and later picked out another. Finally meeting the mysterious designer, Buffett developed a professional relationship with Madam Lee and she continued sending Buffett suits. Lee has attended Buffett’s annual meetings and she’s even begun making suits for other successful executives such as Bill Gates.

From the moment he wakes up, Buffett has his nose in a newspaper. In fact, he estimates that he spends around 80 percent of his day reading.

When asked the key to his success, Buffett pointed to a stack of books and said, “Read 500 pages like this every day. That’s how knowledge works. It builds up, like compound interest.” 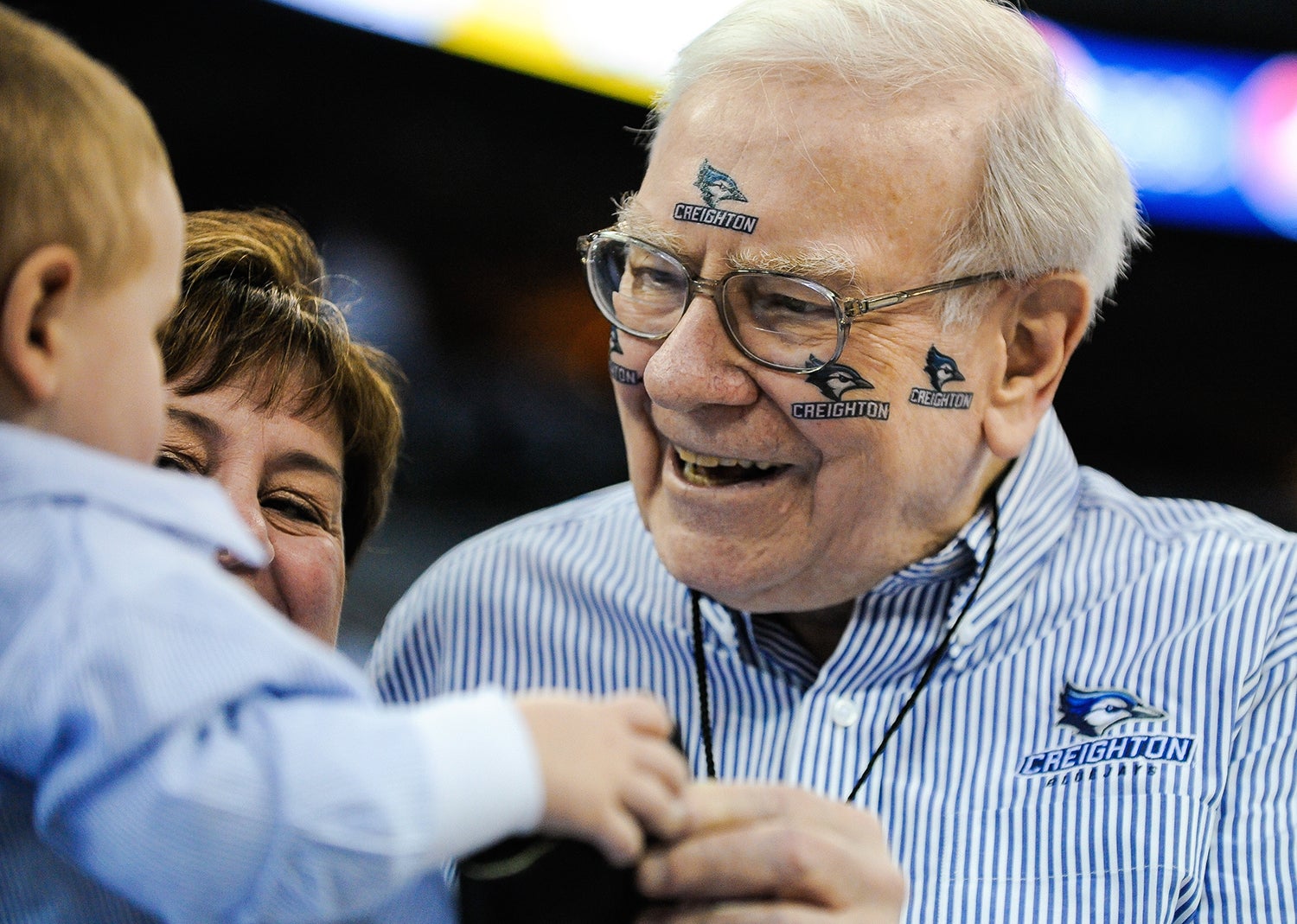 13. Buffett will give an employee $1 million every year for the rest of his or her life if they can guess the NCAA’s sweet 16 teams.

Since 2014, Buffett has held a contest among all of his employees, challenging them to guess who the sweet 16 teams will be during NCAA March Madness, he tells CNBC. If someone guesses all of the teams correctly, he promises to pay them $1 million every year for the rest of his or her life.

In a 2013 CNN interview with Piers Morgan, Buffett shared his take on everything from politics to parenting to technology. Buffett even revealed that he was still using a Nokia flip phone. “This is the one Alexander Graham Bell gave me,” Buffett joked. “I don’t throw anything away until I’ve had it 20 or 25 years.”

15. He takes a dozen kids to Dairy Queen every Sunday.

Buffett, whose holdings include Dairy Queen, treats a group of 12 kids — usually his grandchildren and their friends — to DQ every Sunday, he shared with Joe Kernan on CNBC’s Squawk Box.

Watching them, he can’t help but notice how glued they are to their iPhones — “they barely can talk to me except if I’m ordering ice cream or something like that,” he said. Buffett will ask them questions such as what they are doing on them and how, and if they could live without these tech tools. “The stickiness really is something. I mean, they do build their lives around it. … They love it.”

Buffett rarely emails — in fact, he claims that he’s only sent one email in his life and it ended up in federal court.

In 1997, Buffett responded to an email from a close friend, former Microsoft executive Jeff Raikes, that read, “Doesn’t Microsoft meet all your tests for a wonderful business.” In his response, Buffett laid out all the reasons why he doesn’t use Microsoft. The U.S. government pulled in the email as support for Microsoft’s position in the economy, and Buffett later saw his email in a Wall Street Journal article, he shared in an interview with CNBC. 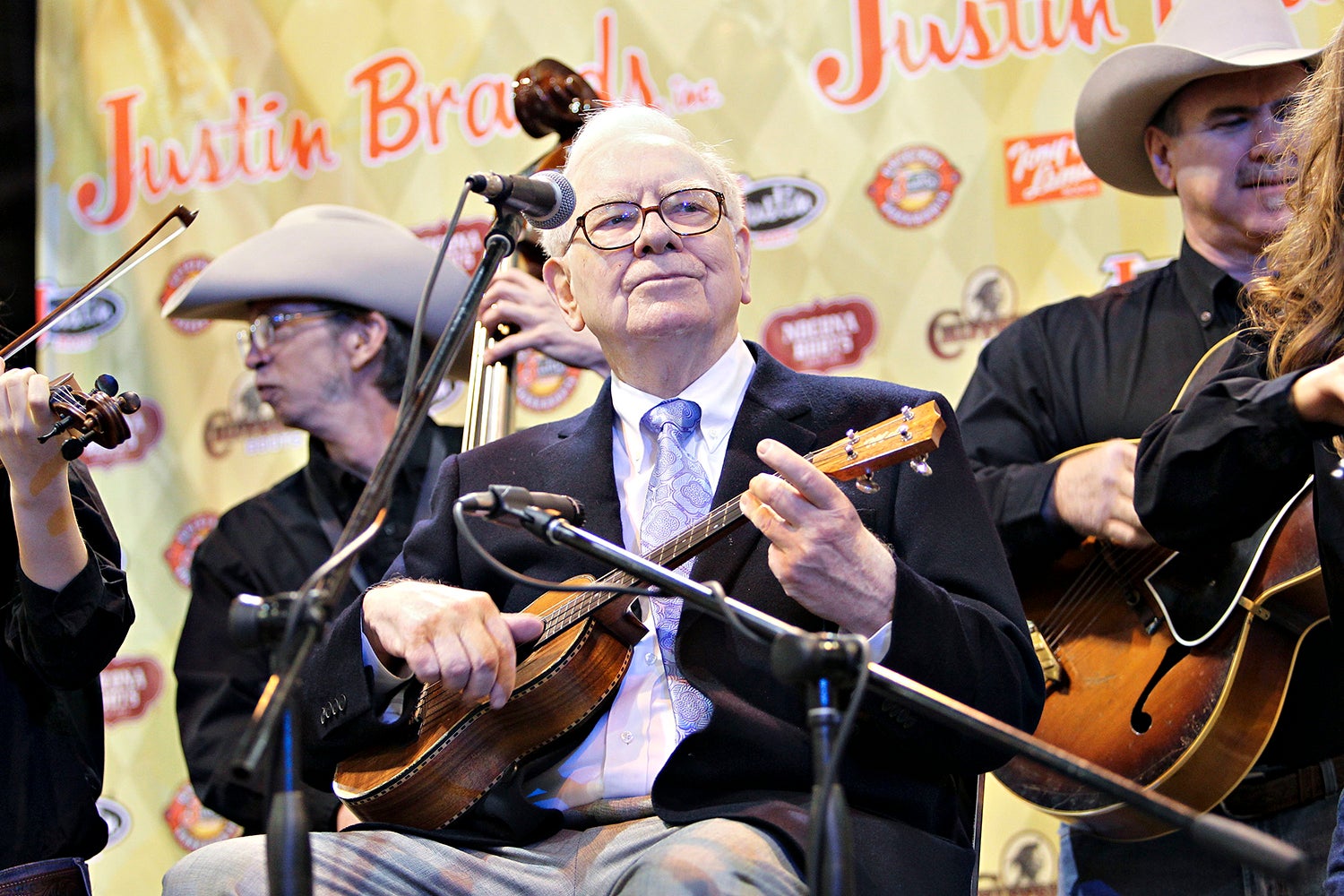 When he was 18-years-old, Buffett developed a crush on a local Omaha girl, Betty Gallagher, Hear Nebraska Radio reports. To his dismay, Gallagher had a boyfriend at the time. So Buffett brainstormed what he could do that Gallagher’s boyfriend could not, and that was to play the ukulele.

After Buffet learned to play the instrument, he serenaded Gallagher, but she still chose the other guy. He still uses his ukulele skills, and you can catch Buffett performing at meetings and during interviews and conventions, sometimes with pal Bill Gates singing along.

18. Buffett pledged to donate 85 percent of his Berkshire Hathaway stocks to charitable foundations.

On top of being a successful investor and business executive, Buffett is also a huge philanthropist. In 2006, he announced that he planned to gradually give 85 percent of his Berkshire Hathaway stock to five foundations — and he’s been fulfilling his promise since.

In July 2016, Buffett donated more than $2.86 billion worth of Berkshire Hathaway stock to the five foundations — one of which is The Bill and Melinda Gates Foundation. He donated around $2.8 billion in both 2014 and 2015. 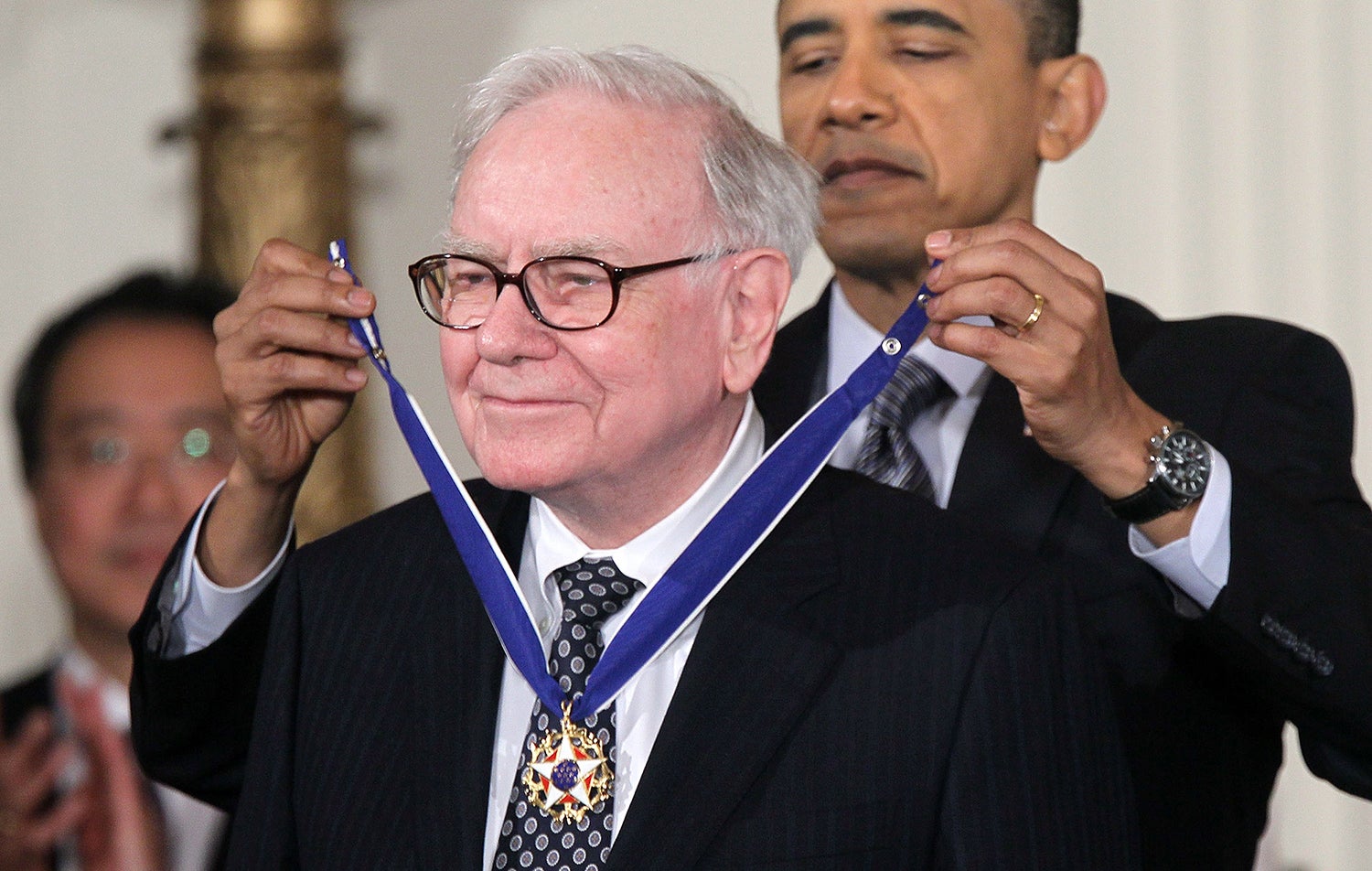 19. He was awarded the “Presidential Medal of Freedom” by Barack Obama.

On Feb. 16, 2011, Buffett was awarded the highest civilian honor, the “Presidential Medal of Freedom,” by former President Barack Obama. Due to his philanthropic donations — since 2014, Buffett has donated more than $2 billion to charitable foundations — Buffett was chosen to receive such a prestigious award.

Obama described Buffett as “not only as one of the world’s richest men but also one of the most admired and respected” who had “demonstrated that integrity isn’t just a good trait, it is good for business.”

20. Out of all investing legends, Buffett has the best track record for beating the market.

From Charles Munger to Peter Lynch, out of all the world’s biggest investors, the 86-year-old investing tycoon has the best track record of beating the market.